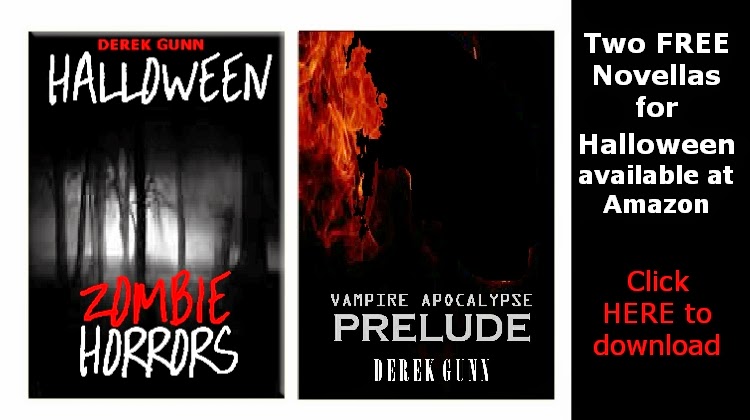 Get to Know Me!

New interview over at Ginger Nuts of Horror

Posted by Derek Gunn at 4:35 PM No comments: 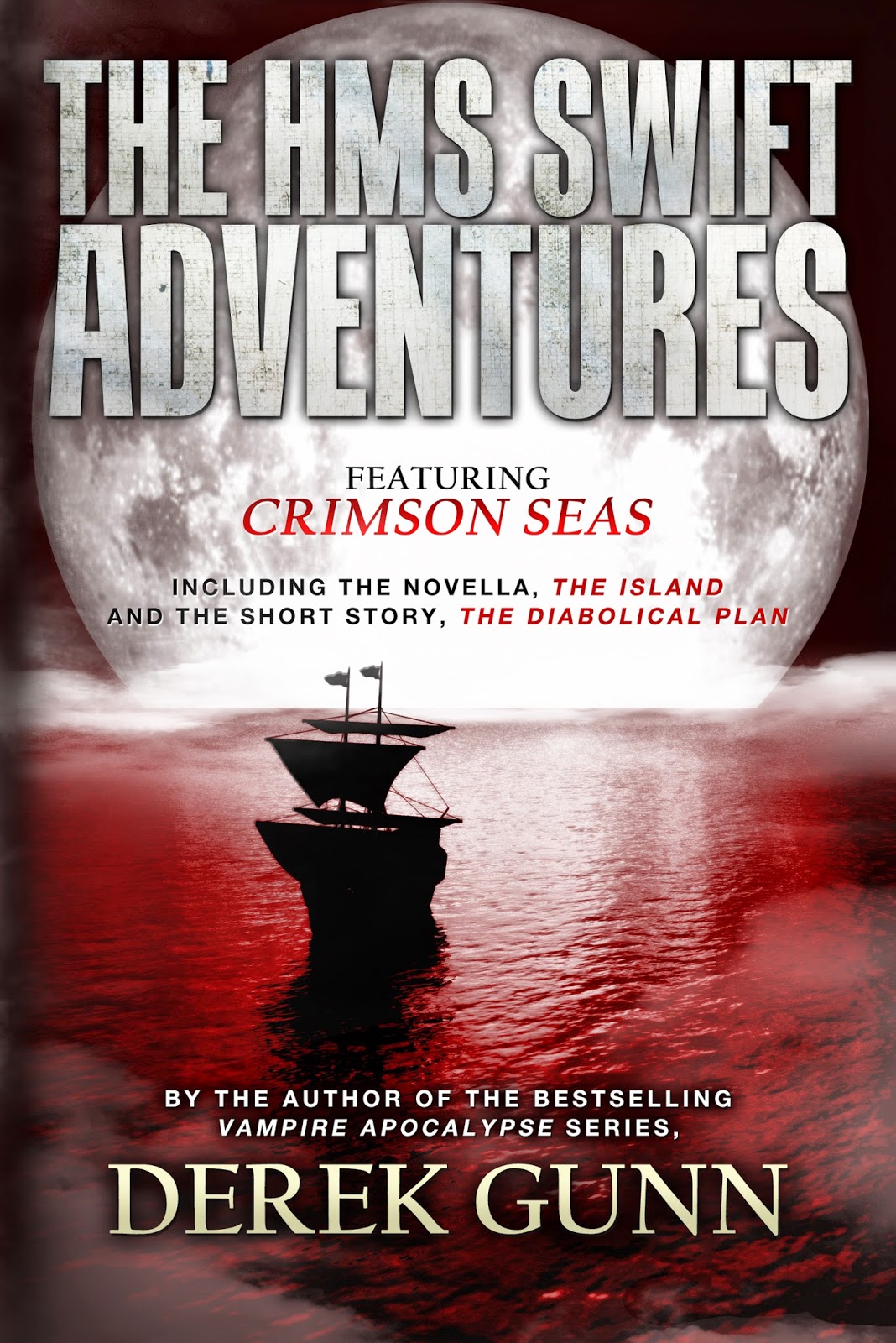 Just released from Permuted Press, THE HMS SWIFT ADVENTURES by Derek Gunn, a reissue of the first novel in this series, Crimson Seas plus the short story, The Diabolical Plan and the novella, The Island. Buy at Amazon.com and Amazon.co.uk and many other retailers.

The year is 1791 and Captain Thomas Butler and his loyal crew of The HMS Swift, a frigate in the service of King George III Of England, are sent on a series of missions where nothing is what it seems, and forces far darker than any of them have experienced before, reign supreme.


"The Diabolical Plan is just a brilliant story!"
--12th issue of THE HORROR FICTION REVIEW, released -21-06 by Novello Publishers

"...delighted me with its convincingly written Aubrey/Hornblower-style high seas adventure style." --The Harrow: Original Works of Fantasy and Horror, Vol 8, No 9 (2005)

Reissue of Derek Gunn’s VAMPIRE APOCALYPSE series plus release of the fourth book – TRAIL OF TEARS.

The Entire Vampire Apocalypse series by Irish author Derek Gunn has recently been re-edited, undergone partial rewrites and has been completely repackaged by Permuted Press.  Plus a fourth brand new book, Trail of Tears, has been released! Check them out at www.derekgunn.com

In a desolate world where communications have ceased…where the global oil supply is quickly dwindling, vampires rise to rule the Earth, In this new era of blood and depravity, you are either a slave to the dark masters or dinner…either a breeding vessel or a rebel. Charismatic leader, Peter Harris is the latter. Join him and his band of comrades as they fight to take back and then rebuild a world torn asunder.

According to author Derek Gunn, the first Vampire Apocalypse book, A World Torn Asunder was first published almost 8 years ago, followed by Descent into Chaos in 2008 and Fallout in 2009 There havebeen over 100,000 downloads of A World Torn Asunder since the first edition was made available in ebook edition in 2010. “I am really excited that Permuted Press has reissued the first three books in the series along with the release of Trail of Tears and I hope they will reach a new generation and a wider audience”

Praise for Derek Gunn’s Vampire Apocalypse books
“An incredibly original piece of fiction that keeps the reader turning the pages.” ~Horror-Web
“…it is solid storytelling..kick back and let the action flow over you.” ~Whispers of Wickedness
“Anyone who likes his or her fiction filled with action will enjoy this.” ~Fear Zone
“Gunn weaves a terrific tale.” ~Apex Science Fiction and Horror Digest
“…offers an intriguing overall plot, with plenty of action and a concept that is far from ordinary.” ~Dark Scribe Magazine
“Derek Gunn didn’t reinvent the vampire novel. Instead he stripped it back to its roots... His books are not comforting paranormal romances; they are violent and visceral supernatural thrillers.” ~International Writers’ Association
“For those who like their vampires tough and truly terrifying, Derek Gunn’s entire Vampire Apocalypse series, make for exceedingly pleasurable and satisfying reading.” ~Fear Zone
Posted by Derek Gunn at 7:33 PM No comments:

Latest Release- THE END OF THINGS, a Novella by Derek Gunn 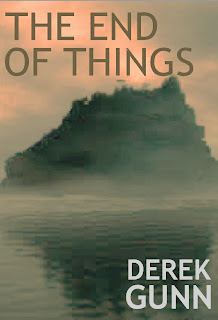 THE END OF THINGS is now available to download at Amazon. This novella was first published as a Podcast in 2007 - Episode 34 of Dr. Pus.

The world has ended with a whimper. The long awaited Zombie Apocalypse took everyone by surprise and everyone is dead. Well, not everyone…

On a small island off the coast of Howth in Ireland a small group of survivers look to the mainland and the hoard of zombies that await them. Ireland’s Eye is only a half mile from the mainland and the small channel of water separating them from the zombies is drying out under the relentless sun. Soon the undead hoards will be able to reach them. Added to that their supplies are running low and one of their number has just died. Things could look better but they are about to get worse. Someone on the island is not what they seem and their dead colleague did not die of natural causes...

Posted by Derek Gunn at 2:57 PM No comments:

Contracts signed with my publisher Permuted Press for the following titles to be released in 2014!

My novel Crimson Seas and the prequels The Diabolical Plan and The Island is being reissued in one single volume in print and ebook edition probably late Summer/early Autumn (Historical naval fiction with a horror twist!) 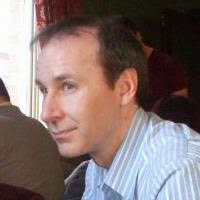 Derek Gunn is the author of the critically acclaimed bestseller, Vampire Apocalypse: A World Torn Asunder - the eBook alone has had over 87,000 downloads and has been described as “a Summer Blockbuster..” ~Gorezone, “An incredibly original piece of fiction “ ~Horror-Web, and “a terrific tale.” ~Apex Science Fiction and Horror Digest. Three more books have been published in this series, Descent into Chaos and Fallout and a fourth instalment came out in April 2014, Vampire Apocalypse, Trail of Tears.
In August 2012, Derek self published in eBook editions two novellas (The Diabolical Plan and The Island) and a novel (Crimson Seas) in his historical naval horror fiction series, The HMS Swift Adventures. These have been picked up by his publisher Permuted Press for reissue in July 2014 as a single volume in print and eBook.
Derek also has a number of other stand alone novels published, The Estuary (Zombie fiction), The Gatekeeper (Apocalyptic Irish mythology thriller) and Gemini (Espionage thriller).
Derek’s short stories have been included in many anthologies including, from Signet Classics, Vampires, Zombies, Werewolves and Ghosts: 25 Tales of the Supernatural. The inclusion of his short story “The Third Option” fulfils a his childhood ambition to have a story of his included in an anthology with some of his literary heroes, as this collection also features works by Bram Stoker, Sir Arthur Conan Doyle, Oscar Wilde, Stephen King, Ray Bradbury, Ann Rice, Woody Allen, Charles Dickens, Henry James, Joe Hill, Yvonne Navarro, Rudyard Kipling, Angela Carter and many more.
Derek works as a specialist consultant for a global telecommunications company. He holds a degree in Marketing.
He is a member of and a contributing editor for The International Thriller Writers Association and an active member of The Horror Writers Association.

NEWS FROM THE APOCALYPSE